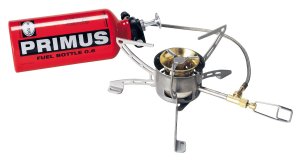 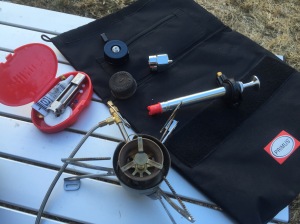 Many folks who have a history of picking up multi-fuel stoves and decide to go the Primus route start with the Omnifuel and moved to the Omnilite later because the Omnilite came out much later.

Logical. The Omnilite is essentially the more recent titanium version of the Omnifuel (with some great enhancements), with a major focus on being lighter by using the lighter metal for many of the parts. The Omnilite also came out years after the Omnifuel.

But I went the opposite direction. Starting with the Titanium after reading all the reviews, using it for a year, and deciding to go pick up the Omnifuel.

And I’m loving the Omnifuel.  The OmniFuel is so much more rugged than the OmniLite.  Both stoves are incredible pieces of engineering, but if I were to have just one, and I wanted one that would work anywhere, anytime, with almost any fuel, hands down, the OmniFuel is the one I’d trust.

– As great as the Omnilite is at being lighter is for backpacking, the slightly (and I do mean just slightly) heavier Omnifuel makes for a more stable unit that doesn’t move around as easily. This makes handling the unit a little easier, and when my fingers are cold and clutzy, every bit of help to make things more stable makes a difference.

– I made an interesting discovery regarding titanium last winter. When going from very hot to very cold in freezing temperatures, thin titanium materials used in backpacking products can sometimes crack as the Titanium is so thin. This luckily hasn’t happened with the Omnilite and maybe it won’t, but the possibility of that happening with the stove could absolutely ruin a trip and may even be dangerous if I rely on it. 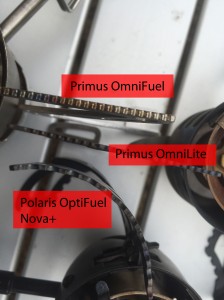 I have now used the OmniFuel a fair bit, and the heavier Omnifuel is definitely more stable and easier to handle, if for no other reason than the fact the fuel line flexibility is the same for both units, but the heavier base unit of the Omnifuel means futzing with the fuel line doesn’t make the based unit flap around as much. It stays put better.

In terms of function, there really isn’t much I could say that hasn’t been said already in several years of reviews about the Omnifuel.

It works with several different types of liquid fuels from the dirtiest diesel/kerosene to cleaner petrol, to even cleaner white gas, up to the cleanest gas canister fuels. With a Kovea adaptor, it can even work with Coleman propane tanks (The adaptor is awesome, btw). About the only fuel common fuel it doesn’t work with is denatured alcohol.

The fuel line is fairly thin and flexible, much more so than most competitor multi-fuel stoves. 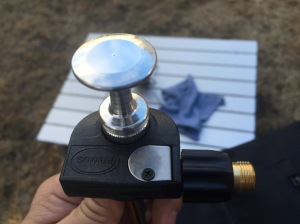 The pump is identical for both the Omnifuel and Omnilite, with its ingenious angled shaft so there is no “L” shape at the end, and the connector is already setup as a lindal valve, so the fuel line can connect to the pump or a gas canister without the need for an adaptor.

Simmer control is pretty amazing on this unit in regular weather, but in freezing weather, the simmer control becomes a little limited.

The fuel jets go through a tiny hole in a bolt. There are three different sized bolts to accommodate different fuels. 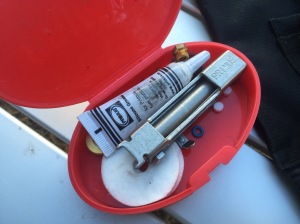 The unit comes with a cleaning and maintenance multi-tool, but get an extra one if you can, because part of the tool is a thin needle, and if that breaks, they there’s no way to cleaning the jet until getting back home. This is especially true when using dirty fuels like kerosene.

Incidentally, in case you were wondering, this unit doesn’t have a pietzo igniter, so you will need a lighter. That’s true of many multi-fuel stoves. 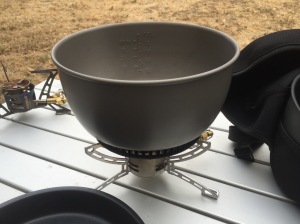 Above are shots with the Optimus HE Cookset and the Snow Peak Camping pot.

A lot of folks like the canvas bag that comes with the Omnifuel and Omnilite. It has extra pockets and can accommodate everything needed to get the stove going, but I’m not a huge fan of it. I’d rather have a very small, very tight fitting hard case. This goes to the reliability factor again. 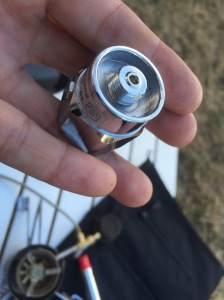 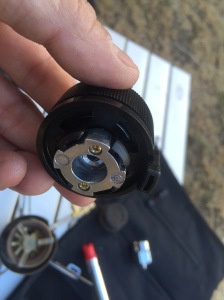 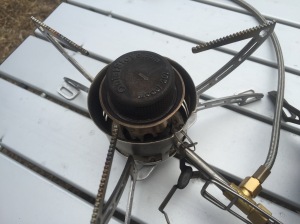 If you happen to be curious how a multi-fuel stove like this compares to gas canister only stoves (like JetBoil, MSR Reactor, Optimus Vega, Soto Windmaster), here is a quick summary:

– Gas can stoves are way easier to setup and stop (and also stay clean)
– Gas can stoves do not need heating up to vaporize like liquid fuels do. This process usually takes a couple of minutes because you have to preheat the unit (using some white gas or some alcohol, or maybe some tinder). It also takes longer to put the multi-fuel stove together, and you have to pump a multi-fuel bottle. All that takes time. In that time, a JetBoil or MSR Reactor will have finished boiling two cups of water.
– Closing the valve of gas can stove is instantaneous, needing only time to let the unit cool down (a fairly fast proess). With a liquid fuel stove, it’s better to air out the fuel line, and then close the two valves. Since multi-fuel stoves are designed to hold heat, they also take longer to cool down.
– Another issue with multi-fuel stoves is that because they have threads to screw the pump into the bottle and threads to screw in the Lindal Valve, it is a tad harder to keep everything clean. In dusty environments, gas canister stoves like the JetBoil and MSR Reactor are much easier to handle.
– Another problem with multi-fuels is the care required to prevent making a mess. Not only can there be soot depeding on the fuel you use (kind of a pain compared to gas can only stoves), but it can be messy to deal with liquid fuel.
– Also, it’s much easier to pack and unpack a gas canister stove like the JetBoil or MSR Reactor because they are cleverly designed as a complete cook system. The JetBoil even has additional attachments to allow use of pots and pans.
– Finally, gas canister stoves don’t really need maintenance. Multi-fuel stoves need some TLC regularly. If you go camping once or twice a year, not a big deal. But if you go often, say, every month, then you probably want to do a spot check/light maintenance (takes 5 minutes) every trip, and a full cleaning twice or three times a year.

With all these convenience related differences between multi-fuel stoes vs. gas cansiter stoves, why choose a multi-fuel stove at all?

– White gas produces less trash. Instead of buying a bunch of gas canisters over a season of backpacking, you can buy just a can or two of white gas, and just refill the fuel bottle for each trip. Much less trash. Less to re-cycle
– Since the fuel source is separate from the stove component, the stove component holds the pot much closer to the ground. This adds a great deal of stability for pots.
– This also allows for better heat control when using a windscreen with stove. On this point, I should mention that the windscreen that comes with the Primus Omnilite and Omnifuel is not that great. I’d recommend a folding panel version instead. They sell for $10-$15 on Amazon.
– Multi-fuel stoves are great for actually cooking, not just boiling water, and that leads to another advantage: Multi-fuel stoves are better at simmering (as mentioned above). When you’re pan frying or making a stew, you really want some simmer control to prevent burning food.
– The other big problem with very fast and convenient gas canister stove systems is that fuel is always wasted in cold weather, anywhere from 5-10 minutes worth, which is more than 10% of the total fuel in a gas can. That’s because cold liquifies the vapor in gas canisters. Connecting a gas canister to the Primus and putting it upside down means getting access to that fuel. And of course, when using a fuel bottle, there really isn’t waste, because whatever isn’t used become part of the next refill.
– Of course there’s the fact that when you travel internationally, it’s useful to have a stove that can use a variety of different fuels to accommodate whatever is available in the visited region.

At the end of the day the point that probably matters most of all is the waste of throwing away gas canisters.

If you go backpacking, say, once a month, and that traveling includes cold weather backpacking, and finally, includes regions where wood fires are restricted, and cooking (not just boiling water), is expected, then using gas canister stoves equates to throwing out at least 1 gas canister per month, and maybe as much as two or three. If that’s your thing, then the best way to be as green as possible while using a clean fuel that produces little to no soot is to use white gas. That alone is worth the slight inconvenience of the inefficiencies of liquid fuel stoves.

Other great Omnifuel reviews from around the web

Having some trial and error experience with Jetboil, I can point out a few things about the fuel, and a few things that have worked for me. First, NOT all canister fuel is created equal. Here are a few for comparison, each with the relative temp values of each fuel – canister fuels are generally a mixture, and they are different ratios.

So.. A low (or no) n-Butane mixture, and higher propane mixture are more suitable for colder temps.