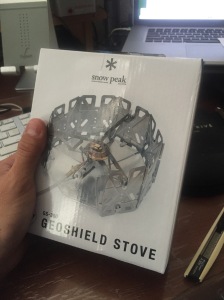 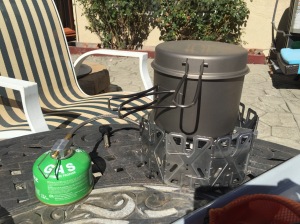 I’ve now completed several tests with the geoshield, and while that doesn’t compare to using it in the field, I feel like I have enough to compare it to, to get a sense of when it would be most useful.

In my understanding of camping stoves, there are 4 primary driving factors:
– Water boil fast
– Cook and simmer capable
– Weight
– Capacity

The Snow Peak Geoshield falls squarely in the: High capacity, low weight, Cook and simmer capable camp.  But the Geoshield also tries to answer the windy/cold conditions dilemma and tries to be lighter than other similar systems.

If you’re looking for a fast water boiler, look elsewhere. While the Geoshield is not slow (anything using an LPG gas can will be reasonably fast since setup and cleanup is so quick), it is among the slowest LPG stoves out there. Roughly 5.5 minutes for 35+ oz. 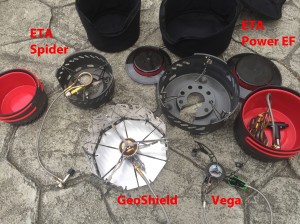 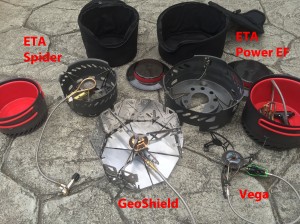 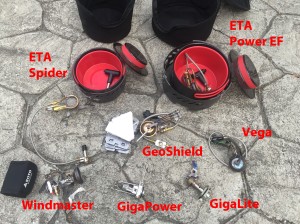 The Geoshield most closely fits between fuel line extended stoves like the Optimus Vega, or the MSR WindPro, and windproof all-in-one cooking systems like the Primus ETA Power series (EF and Spider), and JetBoil Helios (no longer sold). It would also compare to liquid fuel stoves in form factor, but I’ll skip comparing those. 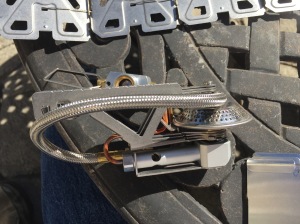 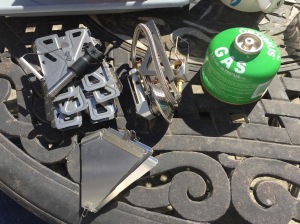 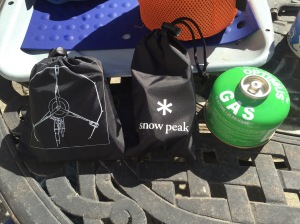 When folded up, the stove/pot stand is about 5″ in length and about 2” in diameter. Which is smaller than the Optimus Vega. But it has two additional pieces (the floor reflector and the windshield/stove legs) which makes the whole thing take more space than the Vega (which doesn’t have these pieces, and is also therefore somewhat less efficient).

A core unique feature of the Geoshield is that the pot stand stove portion has no legs, and instead, clips to the windshield walls which does double duty as the legs. (Note that the Primus ETA Power EF works somewhat similarly, but that’s another review). The windshield is also not 360, and has an opening on one side equivalent to two wall panels. 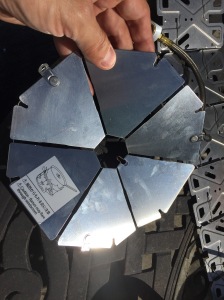 One great innovation is the floor heat reflector that acts as additional structural reinforcement while keeping itself off the ground as well, which somewhat protects the ground from the heat of the stove. 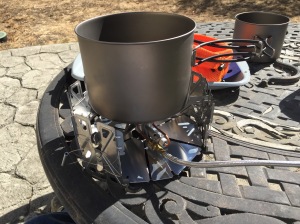 When opened up, the full diameter of the Geoshield is about 8″. Which is pretty huge (also comparable to the Optimus Vega). Plenty large enough for a 6″ cast iron pan, not quite enough for an 8″ cast iron pan because of the angled sides of most pans. Large enough for the x-pot pan, though maybe just a touch too much heat going up the sides. Would need a little testing to be sure. Great for a low-and-wide kettle. 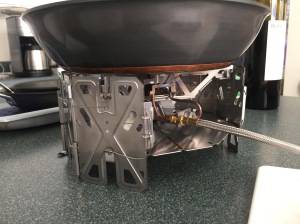 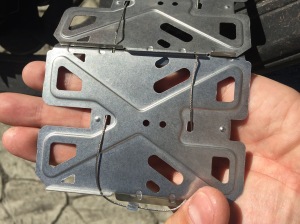 The geoshield is also made more flexible by being able to flip the walls. The clip-in indents have different depths on either side. If the pot stand and floor plate are attached one way, the pot stand is indented a half inch or so. If flipped, the pot stand is level with the rim (allowing larger pans to fit).

Which also means, using this with very small ultralight backpacking pots is a waste. I boiled about 35+ oz of water in a Toaks 1600ml pot, and the large diameter meant moving the handle side of the pot nearer a wall, so the pot was off center. The heat coming up the sides was that much stronger than the Optimus Vega.

The unit feels somewhat loosey goosey, for lack of a better term, and the material of the floor reflector is particularly flimsy, with the wall panels being not much better. But, still, it holds better than expected.  And yet, overall, the entire unit seems “strong enough” for any pot or pan as long as you’re reasonably careful.

Where the Snow Peak Geoshield shines is with wide diameter pots, the wider the better. 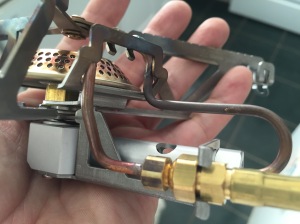 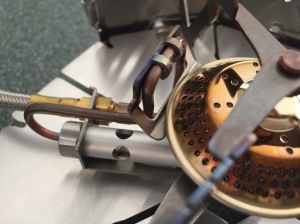 Like most fuel line separated LPG stoves and liquid fuel stoves, the Snow Peak includes a generator. The fuel line separated LPG means you can flip the can upside down to run liquid fuel through instead of vaporized fuel. This is important in very low temperatures when the LPG gas can doesn’t vaporize the fuel well, and also when you want powerful heat without relying on decreasing pressure fuel.

The generator is generally a copper or brass pipe integrated into the fuel line that goes over the stove. The material is selected because it stands up to heat extremely well, but there’s a catch. Unfortunately, these metals are also much more malleable. Because generator coils are so soft and malleable compared to other metals, most generator coils are also sold separately to make replacements possible when they’re damaged. Snow Peak clearly considered this as they’ve put reinforced steel metal plates and bars to keep the generator very well protected. It’s one of the best setups I’ve ever seen. 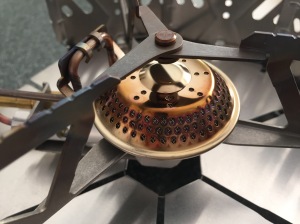 Onto the stove itself. The stove surface is convex, so the flame is facing outwards. The outward facing stove shape also means the burn-in spot on pots will be much wider.

It’s heat efficient enough to make good use of an lpg gas can on simmer, it’s wide enough and low enough for stable pan cooking, and it’s advantage over the Primus ETA Power EF and Primus ETA Spider is that you can choose custom pots and pans more easily to get a more compact setup. Though…the Primus ETA Spider is pretty compact and also includes the cozy….I dunno, tough call.

Best scenario for this unit? A cooking focused backpacking weekend, maybe ultralight on gear, but heavy on the food. With plans for stew or pasta or even pork chops for dinner, and spam, bacon, eggs, hash browns for breakfast. 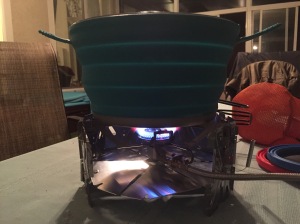 As you can see, the Snow Peak GeoShield works well with the wide body pot, like the X-pot 1.8L or 3.0L, or the same sizes for the ETA pots.  Skillets, pans, and wide body stew pots would work well. 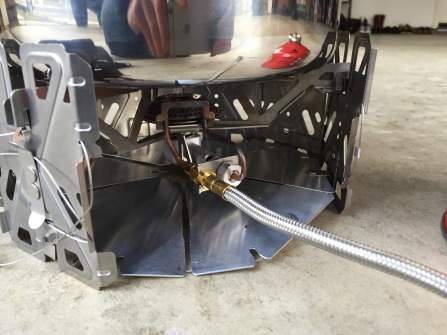 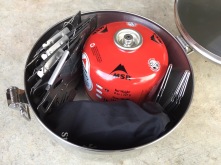 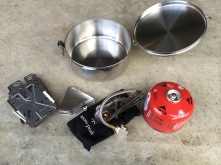 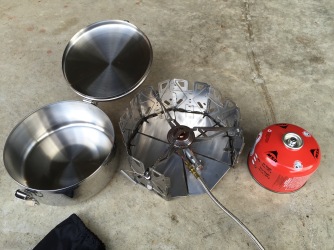 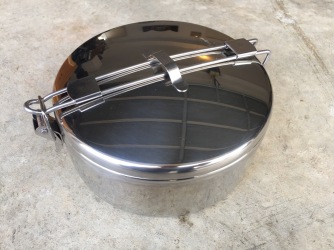 But my current favorite is the MSR Alpine 1.6L Pot.  It’s a very inexpensive steel pot, and with the 220ml LPG can, everything fits perfectly inside.

The only caveat is that it’s not a set, but rather just a single pot (Same goes for the X-pot). So I would always bring the GSI Halulite mug, as it provides the ability to boil up a hot cup of tea while the pot is being used for cooking or serving.

Snow Peak created a dedicated pot for the Geoshield.  The Geoshield parts, fits perfectly into this stew pot, and when all opened up, the stew pot fits precisely into the Snow Peak Geoshield, from edge to edge.  I might need to get this pot (^-^).  In the packing image below, it is missing the reflector piece though.  This might be compensated for by using a single 220ml LPG can, like my example above. 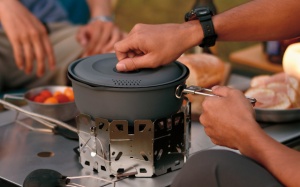 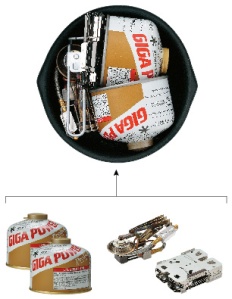 It’s a beautiful 8″ diameter stew pot that is deep compared to a pan, but much shallower than a dutch oven.  As you can see from the product page images above, the stove and pot are basically designed to go together.

Given that the cooking weekend backpacking trip is the most common type of trip for me, and probably many others, it’s definitely a buy worth considering.

Other reviews around the web:

As of 2015 November 11th, I can’t find any video reviews online.  If I come across any, I’ll try to update this post.